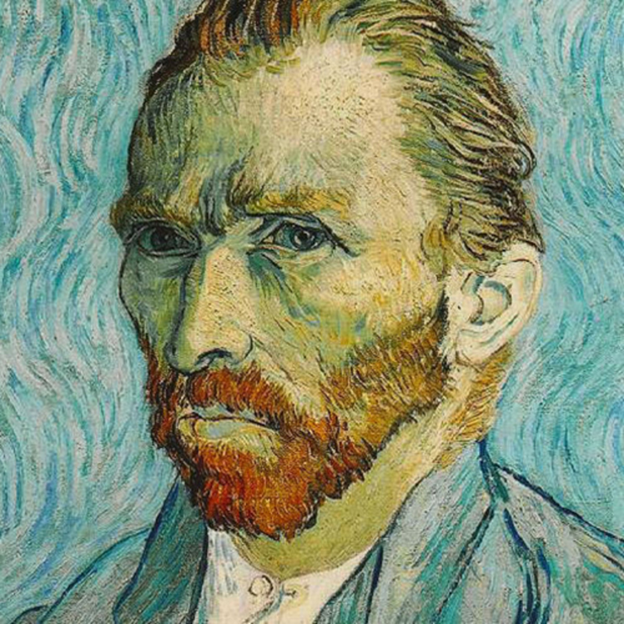 He is one of the most famous and influential artists of all time. However, Vincent van Gogh struggled in obscurity during his brief life.

Vincent van Gogh went on to become one of the world’s greatest artists. A Dutch post-impressionist painter who is among the most famous and influential figures in the history of Western art. With paintings such as ‘Starry Night’ and ‘Sunflowers’, though he was unknown until after his death.

One of the first things likely to come to many people’s minds is the fact that he cut off his own ear. This stark act, committed in 1888, marked the beginning of the depression that would plague him until the end of his life.

But to know van Gogh is to get past the caricature of the tortured. A misunderstood artist and to become acquainted instead with the hardworking, deeply religious, and difficult man. Van Gogh found his place in art. Producing emotional, visually arresting paintings over the course of a career that lasted only a decade.

A unique artist who worked with a sense of urgency which often caused him a great deal of stress. Famed for his bold, dramatic brush strokes which expressed emotion and added a feeling of movement to his works. It’s thought that he often used paint straight from the tube. In the 70 days leading up to his death, he averaged one painting per day.

Vincent van Gogh completed more than 2,100 works, consisting of 860 oil paintings and more than 1,300 watercolors, drawings and sketches. He also wrote scores of letters, especially to his brother Theo, in which he worked out his thoughts about art. “Always continue walking a lot and loving nature, for that’s the real way to learn to understand art better and better,” he wrote in 1874. “Painters understand nature and love it, and teach us to see.”

It was nature, and the people living closely to it, that first stirred van Gogh’s artistic inclinations. In this he was not alone. Landscapes remained a popular subject in late-nineteenth-century art. Driven in part by their dissatisfaction with the modern city, many artists sought out places resembling earthly paradises. Where they could observe nature firsthand, feeding its psychological and spiritual resonances into their work. Van Gogh was particularly taken with the peasants he saw working the countryside; his early compositions featured portraits of Dutch peasants and rural landscapes, rendered in dark, moody tones.

In 1886, van Gogh moved to Paris, where he encountered the works of the Impressionists and Neo-Impressionists, and the Pointillist compositions of Georges Seurat. Inspired by these artists’ harmonious matching of colors, shorter brushstrokes, and liberal use of paint, he brightened his own palette, loosened his brushwork, emphasizing the physical application of paint on the canvas. The style he developed in Paris and carried through to the end of his life became known as Post-Impressionism. A term encompassing works made by artists unified by their interest in expressing their emotional and psychological responses to the world through bold colors and expressive, often symbolic images. In a letter to his sister Willemien, touching upon the mind and temperament of artists, van Gogh once wrote that he was “very sensitive to color and its particular language, its effects of complementaries, contrasts, harmony.”

By 1888, van Gogh had returned to the French countryside, where he would remain until his death. There, he concentrated on painting landscapes, portraits, domestic interiors, and still lifes full of personal symbolism.

Vincent van Gogh’s canvases are sharp and unrestrained. These traits are also attributed to the artist himself. His artworks frightened his contemporaries, as a man who swallows words scares sometimes.

Van Gogh is a methodical and serious painter. This statement may puzzle someone because of the popular myth that the artist was an obsessive and insane person hitting thoughtlessly canvases with irregular touches of his brush. However, Van Gogh knew materials and tools for painting well. He knew how to use them, and thoroughly thought over his compositions. He was an extremely purposeful person.

It’s enough to have a cursory glance at the paintings and drawings by Van Gogh to notice a gradual transition from anatomically accurate works in his early period to more eccentric in his mature years. This slow, but tangible development of the style and technique, makes Van Gogh so attractive for the research. Many artists still continue to use his favorite techniques, such as impasto and drawing from memory.

“My brush stroke has no system at all,” Van Gogh wrote to Emile Bernard. “I hit the canvas with irregular touches of the brush, which I leave as they are. Patches of thickly laid-on color, spots of canvas left uncovered, here and there portions that are left absolutely unfinished, repetitions, savageries; in short, I am inclined to think that the result is so disquieting and irritating as to be a godsend to those people who have fixed preconceived ideas about technique.” In a letter to his brother Theo van Gogh, Vincent commented on his artistic method, “The shadows and the cast shadows are suppressed; it is painted in free flat tints like the Japanese prints.” 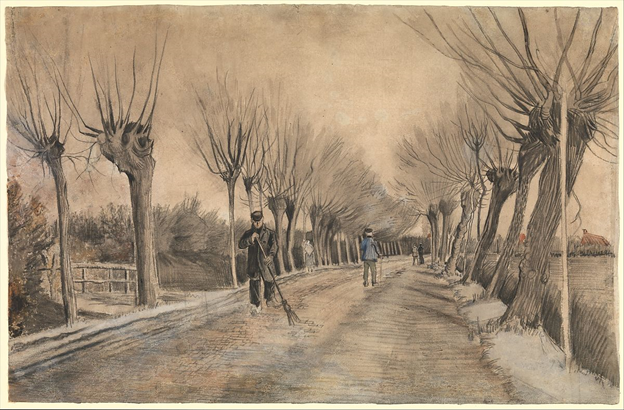 Largely self-taught, van Gogh started his career copying prints and reading nineteenth-century drawing manuals and books. His technique grew out of the idea that to be a great painter you have to master drawing first. Van Gogh felt it was necessary to master black and white before working with color. He focused on learning the essentials of figure drawing and depicting landscapes in correct perspective.

It was only when he was satisfied with his drawing technique that he added colors and bold palette. Eventually becoming one of the most recognizable features of his later work.

Drawing enabled him to grow artistically and to study form and movement. Drawing was also a means of channeling his depression.

His drawings are special due to the fact that his depiction of figures, light, and landscape can be admired without the need for color. The artist drew using pencil, black chalk, red chalk, blue chalk, reed pen and charcoal, although he often mixed mediums when drawing. He drew on a variety of paper types and used any material available to him.

Drawing allowed van Gogh to capture light and images more quickly than with painting. It was often the case that he would sketch out his vision for a painting before starting the painting itself.

As well as drawing, van Gogh produced nearly 150 watercolor paintings during his lifetime. Although these did not feature his unique brush stroke textures, the watercolors are undeniably van Gogh because of their bold, vibrant colors. Initially, van Gogh would use watercolors to add shades to his drawings but the more he used them, the more these pieces became works of art in their own right.

In 1882 van Gogh began experimenting with lithography and went on to create a series of ten graphic works: nine lithographs and one etching. The Potato Eaters was intended for the marketplace and he made a lithograph of the piece so that it reached a broader audience and in an attempt to earn some money.

Many people consider Van Gogh’s letters to be another form of artwork because they include sketches of works that he was focusing on at that time or had just finished. These sketches are proof of van Gogh’s growth and they show the progression of his masterpieces.

In his early career, van Gogh painted with dark and melancholy colors that suited his subjects at the time, namely miners and peasant farm laborers. However, his style changed immensely when he moved to Paris in 1886 and was greatly influenced by the work of the Impressionists and Neo-Impressionists.

He began using a lighter palette of reds, yellows, oranges, greens, and blues, and experimented with the broken brush strokes of the Impressionists. Van Gogh also attempted the pointillist technique of the Neo-Impressionists whereby contrasting dots of pure color are optically mixed into the resulting color by the viewer. Such experimentation was evident in Self-Portrait with a Straw Hat of 1885. 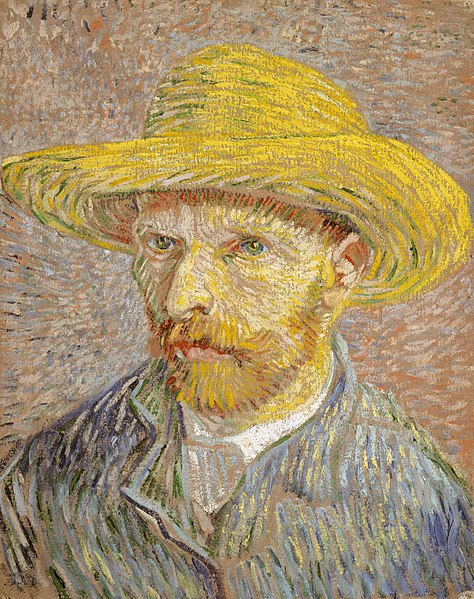 Influenced by Japanese prints, he painted dark outlines around objects, filling these in with areas of thick color. His choice of colors varied with his moods. Occasionally he deliberately restricted his palette, such as with Sunflowers which is almost entirely composed of yellows.

Vincent van Gogh painted over 30 self-portraits between the years 1886 and 1889, reflecting his ongoing pursuit of complementary color contrasts and a bolder composition. His collection of self-portraits places him among the most productive self-portraitists of all time. Van Gogh used portrait painting as a method of introspection. A method to make money and a method of developing his artistic skills.

In 1888 van Gogh moved from Paris to Arles and lived for some time with Gauguin. Gauguin bought a bale of jute and both artists used this for their canvases, causing them to apply paint thickly and to use heavier brush strokes. Van Gogh started to imitate Gauguin’s technique of painting from memory during this time which resulted in his paintings becoming more attractive and less realistic. Van Gogh’s emerging style saw him emotionally reacting to subjects through his use of color and brush work. He deliberately used colors to capture mood, rather than using colors realistically. No other artist was doing so at this time. Van Gogh said: “Instead of trying to reproduce exactly what I see before me, I make more arbitrary use of color to express myself more forcefully.” 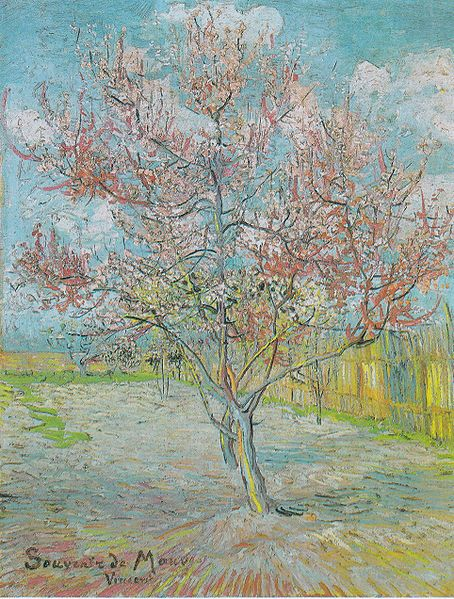 Inspired by the light and vibrant colors of the Provençal spring, he created 14 paintings of orchards in less than four weeks. Painting outdoors and changing his style and technique. The composition of The Flowering Orchard is evidence of the influence of Japanese prints. Pieces such as Oleanders and Shoes resonates with the artist’s personal imagery.

In his short life, Van Gogh was able to sell only a few paintings. He was in despair. However, he did not cease to work hard and develop his style. Today he is one of the most popular artists and his artworks are the most abducted in the world.

Several of his paintings now rank among the most expensive in the world; “Irises” sold for a record $53.9 million, and his “Portrait of Dr. Gachet” sold for $82.5 million.

What is Van Gogh’s Painting Style?

A Dutch post-impressionist painter who is among the most famous and influential figures in the history of Western art.

How many paintings did Van Gogh complete before his death?

Did Vincent van Gogh really cut off his whole ear?

In 1888 Vincent van Gogh that he cut off his own ear when tempers flared with Paul Gauguin. The artist with whom he had been working for a while in Arles.

How many paintings did Van Gogh sell during his lifetime?

Van Gogh was able to sell only a few paintings. His first commission was from his uncle Cor.

Can you tell me what Portrait of Doctor Gachet sold for at auction?

Looking to kick back and relax? Here’s what to look forward to on Netflix in November!

Art Therapy and Painting can help Australians to achieve a greater sense of overall well-being. Here’s how to get started!

How stress affects the body

“If you hear a voice within you say you cannot paint, then by all means paint and that voice will be silenced.”

Close Menu
Join Waitlist Please leave your email below and we will inform you when this design is back in stock (not long to go!)
×
×